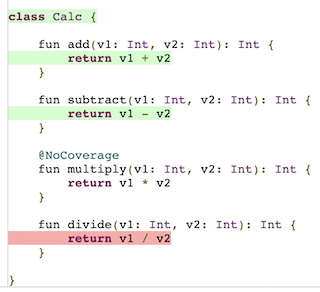 Long time ago in our company, we decided to use code coverage level as one of the must requirements to merge PR into develop branch. We have automated merge bot which automatically merges if the branch meets all requirements. We came up with magic number 80%, so every new/modified class must be covered by Unit tests as minimum 80%.

There are many discussions about code coverage, 80%, JaCoCo, etc. This article is not about that.

We were happy with this requirement. Teams started to write more testable code, think about architecture, app stability went up, etc. We understood it’s impossible to cover all classes in our project, there are many reasons: legacy code (lots of LOC need to be refactored; Business just won’t give time for that; “if it works don’t touch!”), auto-generated code (why we need to test 3rd party libs, etc), some code frankly does not need to be tested. Therefore, we need a way to filter out specific classes from JaCoCo report and allow devs/tools to merge branches.

Even more problems started to appear after moving to Kotlin from Java. JaCoCo, as you may know, works as java-agent with java bytecode only. Kotlin is a great language which reduced boilerplate code a lot but underhood the hood (in case of JVM) it generates a lot of helper methods, lines of code. For example, data class becomes a class with auto-generated methods such as equals, hashCode, component1, etc; even one line of code like s?.foo() or just s.foo() (where s defined as lateinit) will have 1 if in the generated code. Obviuosly, we do not have to test the generated code. All this generated stuff dramatically decreased our code coverage numbers. Keep in mind, those numbers can be KPI for some teams (yeah, bloody enterprise…).

This way is suitable for most teams. Create a task using JacocoReport and make it depend on test & generate report tasks. Then define an array of classes that you want to ignore and pass it as excludes parameter of fileTree method.

Since all developers are lazy and we rather spend 1 day on automating routine job, my colleague came up with Annotation processor approach. He has created NoCoverage annotation and a processor which saves all annotated classes into a file. Later on the file was used by jacocoTestReport instead of fileFilter array. Genius!

We found out that JaCoCo team in order to support Lombok added a filter which doesn’t count coverage of @Generated annotated classes/methods. Without thinking twice, another colleague has forked Kotlin compiler (!) and modified so it started adding Generated annotation to every generated method. Of course, we haven’t used this approach in prod code. Later, JaCoCo added @kotlin.Metadata filter too.

While investigating JaCoCo code I found that they changed AnnotationGeneratedFilter behaviour. Now instead of checking exact match of annotation name it just should contain Generated word. It means we can create any annotation with proper name and JaCoCo will automatically ignore all annotated classes and methods.

In case of Kotlin you can use typealias to make your code more readable: